Of all words of tongue or pen, the most infuriating are “Your base has been.” At least in ARK, there are few things more frustrating than logging on and finding out your base was raided overnight. Even worse is having it happen while you’re roaming around far away from home.

One of the most basic ways to protect against intruders is to set traps. Ideally, those not only kill would-be burglars, but also help your castle to a reputation of being a death-trap. 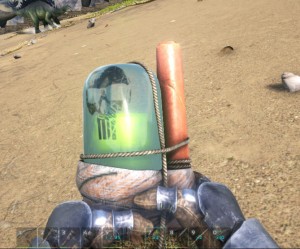 The Gas-Trap will render anyone who is in its range when it triggers unconscious for five minutes (regardless of how many traps got them). This doesn’t apply to allies of the person who placed it though, but it includes the attacker’s dinos. Careful though, if one member of an attacking party survives the onslaught, he or she can wake up their companions. Another possible use for those traps is to lure wild dinosaurs into a trapped spot in order to knock them unconscious.

A sensible strategy for intruders is to try to destroy the traps from a safe distance via ranged weaponry such as arrows.

The Alarm-Trap on the other hand will simply sound an alarm when its triggered. You can easily tell both kinds of traps apart: The Narcotic Trap has a poisonous green fluid inside, whereas the alarm trap looks like two speakers mounted on opposite ends. To get the tripwire you’ll have to place two of those traps near each other.

The traps can be crafted in your inventory.

Also check out the other new items that came with the Patch 186.0: Industrial Grill and Omni Lamp.