A new dinosaur has been announced: the Electrophorus. This little follower is more known as electric eel, albeit this is the giant version. There are no additional informations available yet, but maybe we’ll be able to use them as an alternative power source? ;-)Common Name:ElectrophorusSpecies:Electrophorus BeluadomitoTime:HoloceneDiet:CarnivoreTemperament:ReactiveDomesticationTameable:YesRideable:UnknownWild: Occupying a space in the low-to-middle end of the food […] 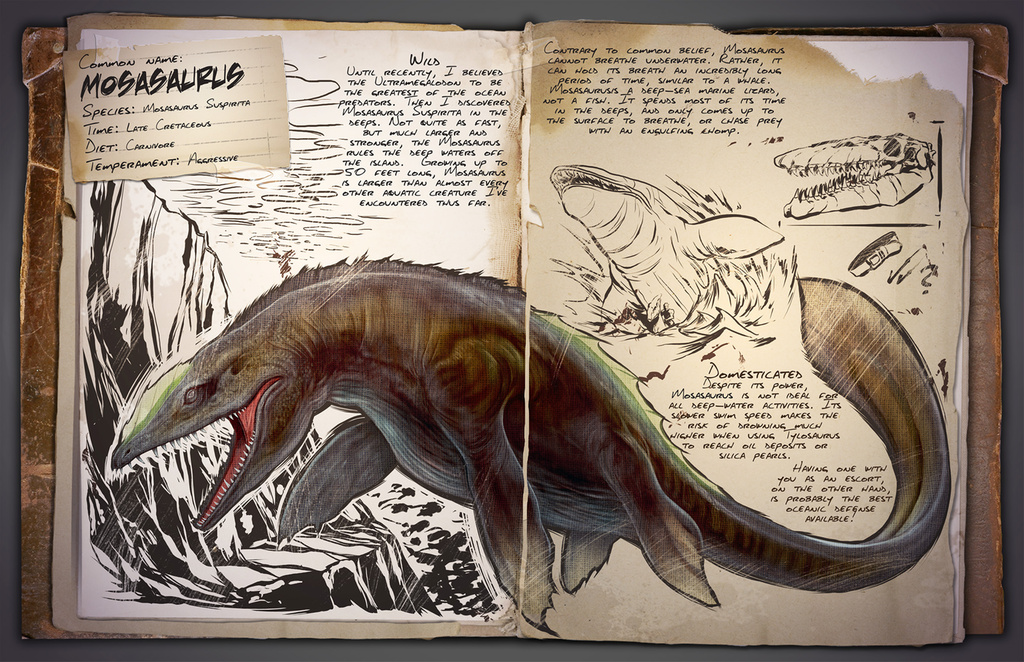 Common Name:MosasaurusSpecies:Mosasaurus suspiritaTime:Late CretaceousDiet:CarnivoreTemperament:AggressiveDomesticationTameable:YesRideable:YesCommandcheat summon mosa_Character_BP_CWild: Until recently, I believed the ultramegalodon to be the greatest of the ocean predators. Then I discovered Mosasaurus suspirita in the deeps. Not quite as fast, but much larger and stronger, the Mosasaurus rules the deep waters off the island. Growing up to 50 feet long, Mosasaurus is larger than […] Any diver knows: You should never cheap out on your equipment. Unfortunately, people on the ARK can’t actually build their own diving equipment, which is why they have to take advantage of nature’s solutions. Todays new dino, the Liopleurodon will serve its rider as a diving cylinder, as it will enable him or her to […] A new Dinosaur has been announced. The Dunkleosteus is a tough fish which can be used for mining as well as protection.Common Name:DunkleosteusSpecies:Dunkleosteus LoricaruptorTime:Late DevonianDiet:CarnivoreTemperament:AggressiveDomesticationTameable:YesRideable:YesWild: Dunkleostus Loricaruptor is a very strange creature. It is a fairly large fish, covered head to tail in armored plates, with incredibly powerful jaws. It tends to eat the islands’ water-dwelling […] Common Name:SarcoSpecies:Sarcosuchus excubitorTime:Early CretaceousDiet:CarnivoreTemperament:PatientDomesticationTameable:YesRideable:YesSaddle:Sarco Saddle (Lvl. 35)Command:admincheat summon Sarco_Character_BP_CWild: Among the island’s water-based threats, Sarcosuchus excubitor is a lot what you might expect from a giant crocodile: A patient killing machine. It spends much of its days lazily waiting in the water for prey to walk near. That said, it is not opposed to scurrying onto […] 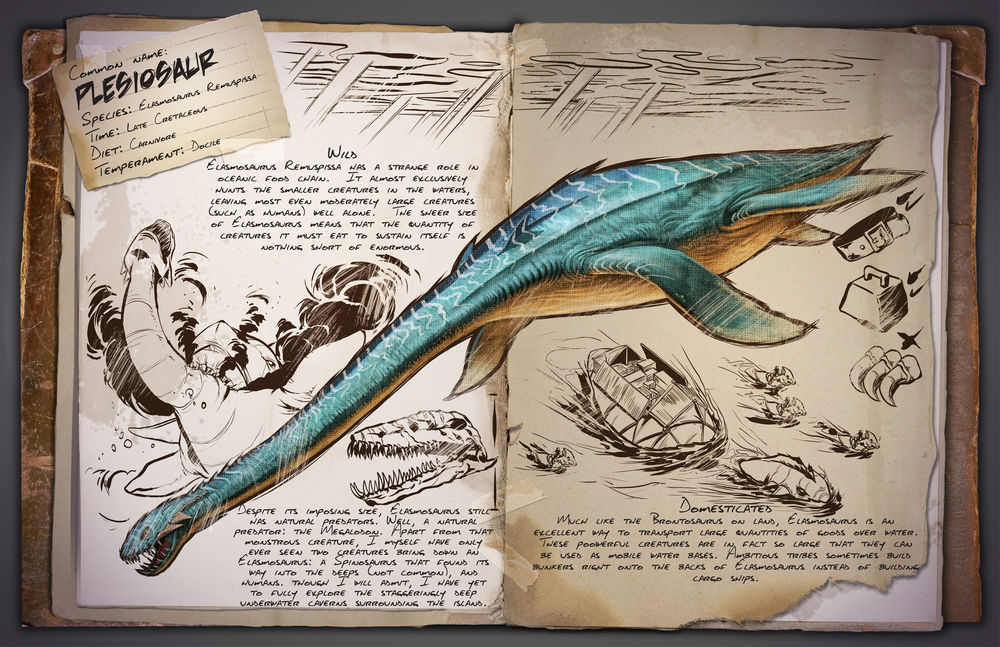 Common Name:PlesiosaurSpecies:Elasmosaurus remuspissaTime:Late CretaceousDiet:CarnivoreTemperament:DocileDomesticationTameable:YesRideable:YesSaddle:Plesiosaur Saddle (Lvl. 60)Command: admincheat summon Plesiosaur_Character_BP_CWild: Elasmosaurus remuspissa has a strange role in the oceanic food chain. It almost exclusively hunts the smaller creatures in the waters, leaving most even moderately large creatures (such as humans) alone. The sheer size of the Elasmosaurus means that the quantity of creatures it must eat […] 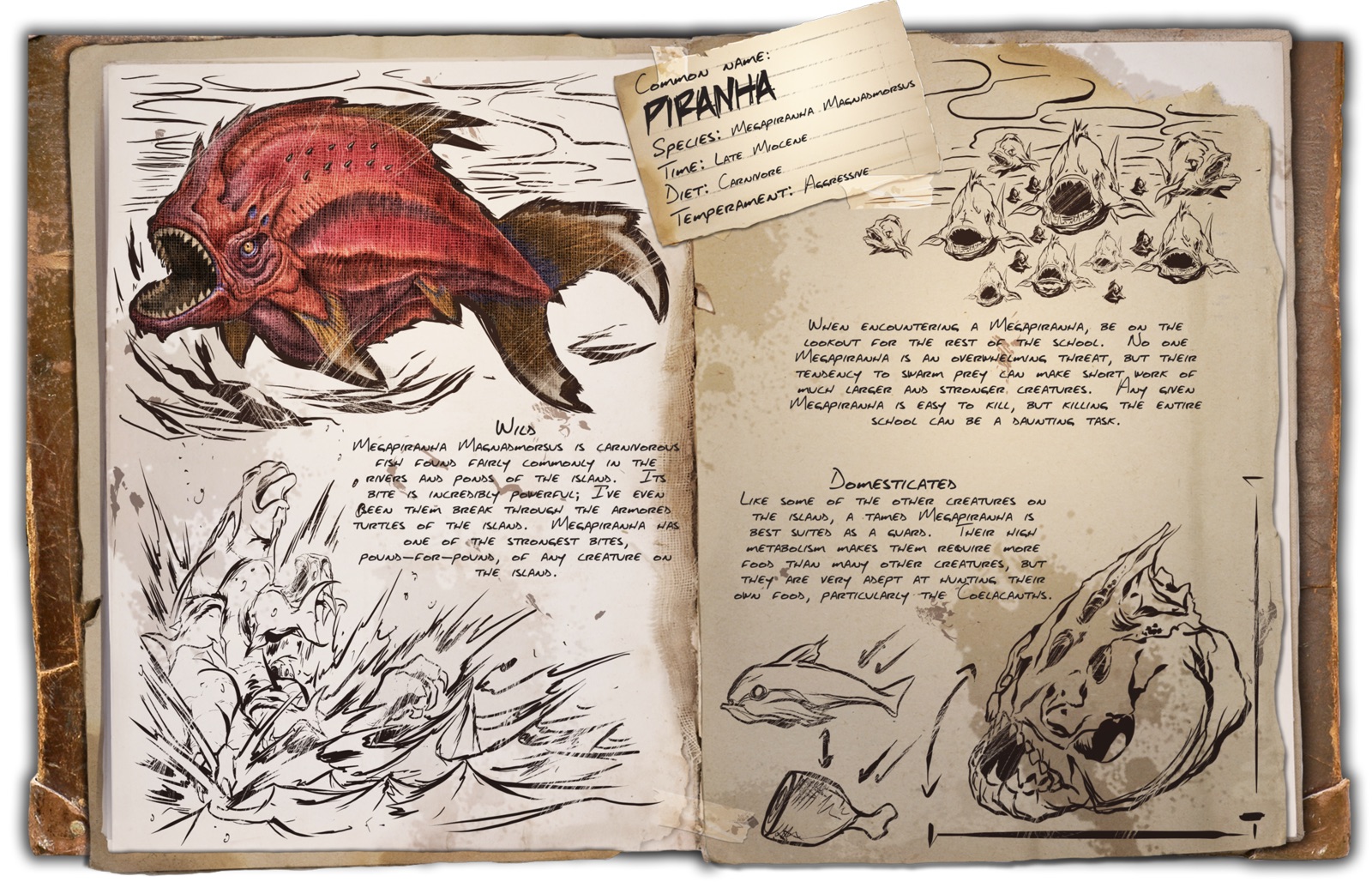 Common Name:PiranhaSpecies:Megapiranha magnadmorsusTime:Late MioceneDiet:CarnivoreTemperament:AggressiveDomesticationTameable:NoRideable:NoCommand:admincheat summon Piranha_Character_BP_CWild: Megapiranha magnadmorsus is carnivorous fish found fairly commonly in the rivers and ponds of the island. Its bite is incredibly powerful; I’ve even seen them break through the armored turtles of the island. Megapiranha has one of the strongest bites, pound-for-pound, of any creature on the island.Domesticated: Like some of […] Common Name:MegalodonSpecies:Carcharodon ultramegalodonTime:Miocene-PlioceneDiet:CarnivoreTemperament:AggressiveDomesticationTameable:YesRideable:YesSaddle:Megalodon Saddle (Lvl. 45)Command:admincheat summon Megalodon_Character_BP_CWild: Were it not restricted to the waters, Carcharodon ultramegalodon might be the most dangerous creature on the island.Domesticated: If someone is able to tame this beast, that person would be the undisputed ruler of the oceans around the island and would have access to resources no one can […] Common Name:IchthySpecies:Ichthyosaurus curiosaTime:Late Triassic – Early JurassicDiet:CarnivoreTemperament:CuriousDomesticationTameable:YesRideable:YesSaddle:Ichthyosaurus Saddle (Lvl. 10)Command:admincheat summon Dolphin_Character_BP_CWild: Ichthyosaurus curiosa is a comparatively small carnivore found in the waters around the island. It is slightly larger than a human, but that’s still small compared to the leviathans roaming these waters. It seems to be very interested in any creature around its size, […]