Mod Spotlights are a new series where we look at cool tools and mods made by members of the community. If possible, we also ask them about their visions for their projects.

ARK recently added RCON support to its server software. However, many users are not particularly fond of the prospect of having to remember all sorts of console commands just to manage their server remotely. Most existing client software is also not specific to ARK. Community member Henry Garle fixed that! Primed with previous knowledge from developing similar tools for the game Rust, he created ARKon, a graphical RCON client. 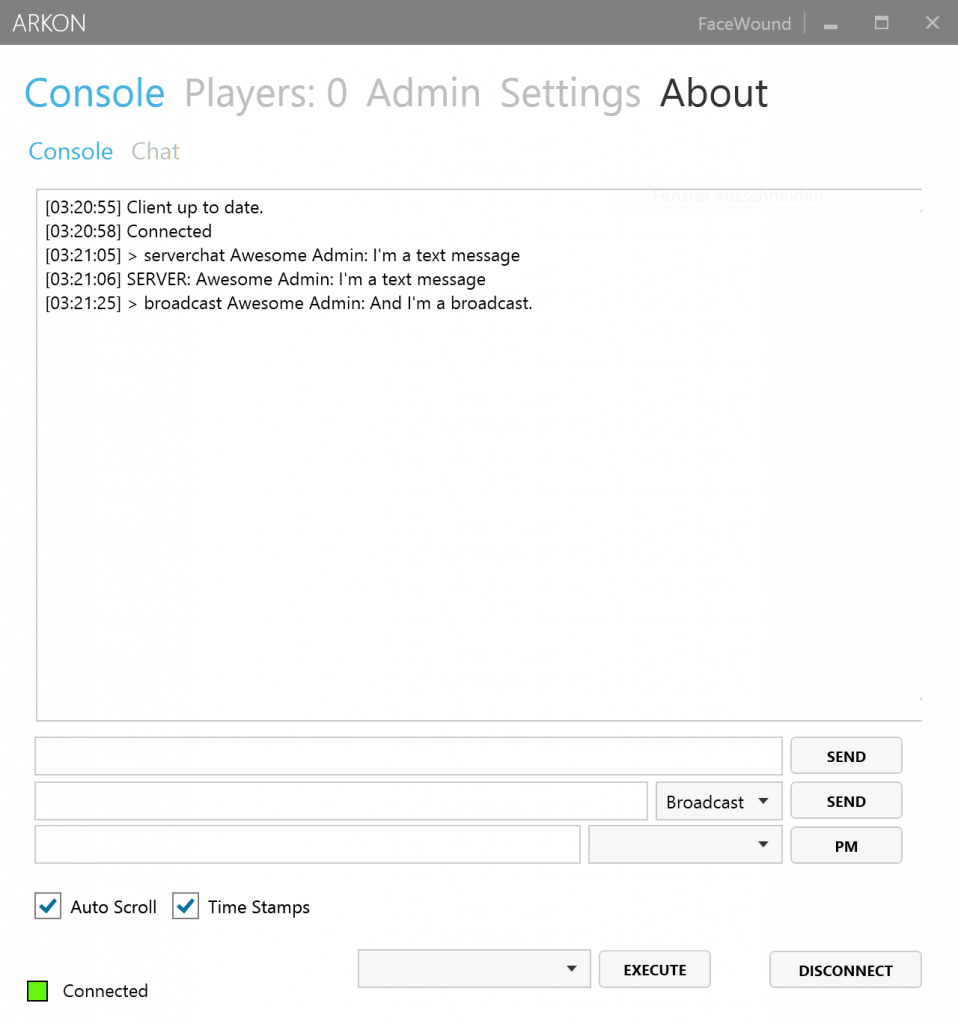 As you can immediately see, it offers all the comforts of the in-game server manager. Especially if you’re managing multiple servers, that alone is worth its weight in gold. Simply enter your connection information under “Settings”, click on “Connect” and you’re ready to go.

Thanks to the intuitive graphical interface, you don’t have to have a glossary handy to administrate your server. For example, banning a player is as simple as clicking on his name in the player-list and pressing the “Ban”-button. Not only does that make for better dramatic effect, it’s also much more convenient than entering at least two different commands to achieve the same result.

Its impressive set of advanced features should also convince the console-aficionados to give it a chance. The built-in connection info manager makes managing many different servers a matter of simply choosing where you want to go, and a menu for scripted commands allows you to enter a series of commands for reuse. Better still, they can be set to execute in set intervals or on start-up of the application. Those functions will save power users a lot of work in the long term.

We got together with Henry and asked him about his visions for ARKon.

Q: Is there anything particularly innovative about the tool you want to highlight? The scripting-menu is something that seems to set it apart from other tools.
Henry: I think that is the main differentiator at the moment. I have a lot more plans for things I’d love to do, expanding the scripted commands to be more like scripts is one thing that might come up soon, so you can rather than just execute once put in things like delays etc, so you can have it send shutdown messages then restart the server, that kind of thing

Q: What are your plans for the future of the tool? Are there any features that you wish to include but aren’t possible yet?
Henry: The dev’s have hinted at greater support in the future, things like a live feed detailing kills, deaths and other interesting features. That and expanding the current RCON command list to include the other ingame ones such as giving items and teleporting which would be really good fun to get into the tool. Very much looking forward to adding features as ARK’s capabilities expand 🙂

Q: I understand the tool is currently Windows-Only. Do you have plans to add Linux/Mac support?
Henry: I’d love to in the future but as it is written using C# and WPF its not directly portable its self. I am planning on expanding the features of the web client to match that of the desktop client so there is a half way house in the short term which gives Linux/Mac users a usable client

ARKon is available for Download in this thread in the Steam Forums.